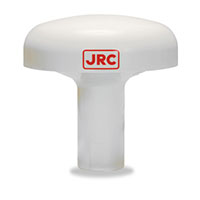 The GPS124 includes a SBAS (WAAS/EGNOS/MSAS) receiver. By using SBAS you can achieve precise position.

The accuracy of position fixes is self-tested by the GPS124 (RAIM function). This function assures higher reliability to the position fix than conventional method.

The GPS 124 is designed to simultaneously receive signals from 12 orbiting satellites, ensuring the most accurate positioning.

Since the output data is changeable between IEC61162-1 (NMEA0183 version 2.3), NMEA version 1.5 and 2.1, you can connect the GPS124 to various Marine Electronics Equipment such as Marine Radars, Fishfinders, Plotters, or others.